Главная 7 Blanks 7 Preparation for the winter for pizza marinated tomatoes with pepper, recipes with photos

Preparation for the winter for pizza marinated tomatoes with pepper, recipes with photos

I make this harvesting specially in order to cook homemade pizza in the winter. In this cold period, it is usually quite difficult to find tomatoes and bell peppers in stores. And if they are, they are certainly tasteless – oak, specially grown in greenhouses and often with the addition of various, not always useful, fertilizers. Or very expensive.

Therefore, having such a blank at hand, you can not wring the nerves, running through the trays with vegetables and fruits, but simply get a jar from the cellar and add tomatoes and pepper to the pizza.

Time for preparing: depends on the number of cans, but you can handle in 40-60 minutes.

Ingredients for making a small can of 320 grams: 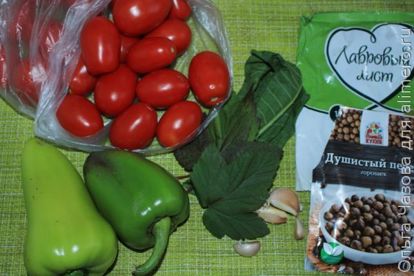 For this preparation it is better to take strong and dense tomatoes. We will cut them with rings and it is very important that they are fleshy and contain as little juice as possible. Otherwise, in the process of marinating, tomatoes can become very muddy, and the billet will lose its appearance.

First, prepare the banks. I have cans of 320 grams. And I indicated the number of ingredients for just one such jar. It is this kind of bank that I usually take for pizza. Therefore, it is very easy to calculate how much you need to prepare such jars. Let’s say you cook pizza every two weeks. It turns out that for 3 winter months you will need 6-7 such jars.

So, each jar is well washed with soda and soap. After scalding several times boiling water or calcined in the oven at one hundred degrees.

Put a leaf of currant and a leaf of horseradish on the bottom of each jar. 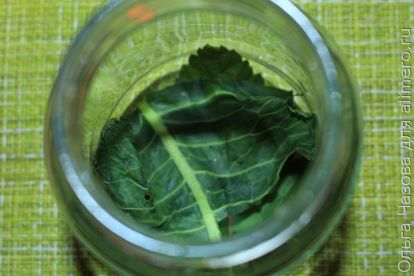 Then take the garlic, remove the husks from it and cut into plates. Put the garlic in the jar. 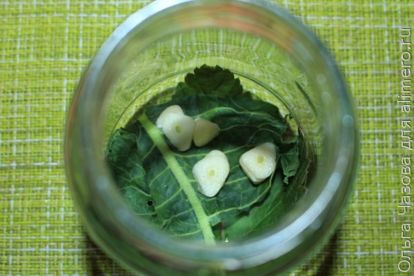 Now we add some peas of black and fragrant pepper to the jar. 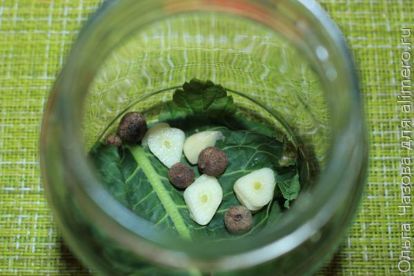 Get to the vegetables. Very well washed.

Cut tomatoes into plates with a thickness of 5 millimeters. I have small tomatoes, and I cut each tomato into 4-5 pieces.
Then take the pepper. Cut it in half and remove the seeds. Cut pepper into dice or stripes.

Putting vegetables in layers in jars. At first I always put a layer of pepper. 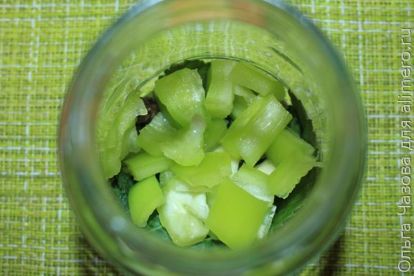 Then cover the pepper with tomatoes. Then pepper again. And again tomatoes. 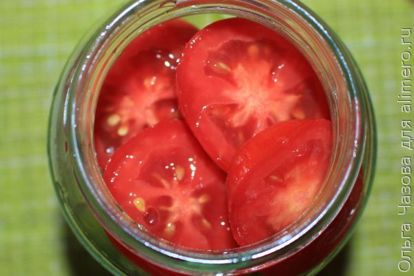 At the end I throw a couple of slices of chopped garlic. 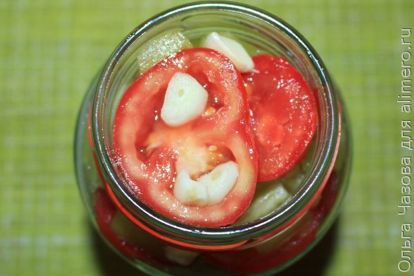 Now we need to cook the marinade.

Put the bay leaf, sugar and salt in a saucepan. Fill all with water. Give the salt and sugar to dissolve and bring to a boil. Boil for 3 minutes and remove the marinade from the stove. All the proportions I have indicated in the ingredients.

Pour marinade in banks. Scroll through each jar around its axis so that excess air can escape.

Take the saucepan. Pour water into it – so much so that she could hide the jar on the hangers. Put the jar in the pot and bring the water to a boil. Boil for 3 minutes and remove the jar. 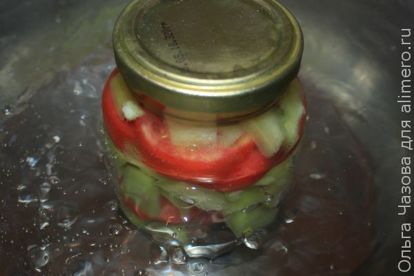 A loan in each jar add vinegar essence 70% half a teaspoon. Covers in cans tightly twist. And turn every jar upside down. Cover with a dry towel. We give banks so stand for 2-3 days. If the banks did not leak, did not grow dim and did not crack, then they can be sent to a cold place for storage.

That’s all, our preparation of vegetables for pizza is ready. 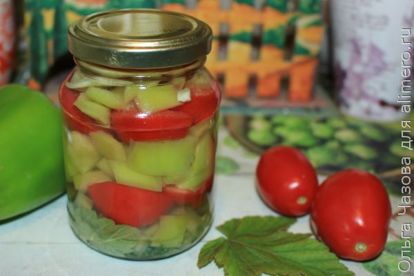 How to make quince jam with apples, recipes with photos

As marmalade: sweet plum jam with a bone for the winter – simple and the best recipe, recipes with photos

Interesting jam from plums and cherries for the winter, recipes with photos

Interesting jam from irgi and cherries for the winter, recipes with photos

Amazing chocolate cherry jam for the winter, recipes with photos

Preparations from May dandelions, recipes with photos

Harvesting apples for the winter in the oldest way, recipes with photos

Preparation for the winter: Koporsky tea fermentation in a jar, recipes with photos

Harvesting for the winter. Aspic apples, recipes with photos

Yeast bagels without eggs, filled with jam, recipes with photos

Another gooseberry and raspberry recipe. Today I connected them together. Sweet, aromatic raspberry and sour, ...

It is very convenient to make jams from gooseberries! After all, the gooseberry itself is ...